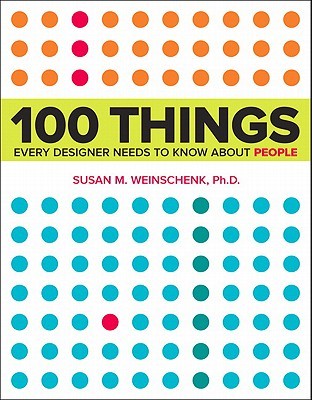 Vision trumps all the senses. Half of the brain’s resources are dedicated to seeing and interpreting what we see. What our eyes physically perceive is only one part of the story. The images coming in to our brains are changed and interpreted. It’s really our brains that are “seeing.”

WHAT YOU SEE ISN’T WHAT YOUR BRAIN GETS

PEOPLE IMAGINE OBJECTS TILTED AND AT A SLIGHT ANGLE ABOVE

PEOPLE SCAN SCREENS BASED ON PAST EXPERIENCE AND EXPECTATIONS

PEOPLE CAN MISS CHANGES IN THEIR VISUAL FIELDS

PEOPLE BELIEVE THAT THINGS THAT ARE CLOSE TOGETHER BELONG TOGETHER

RED AND BLUE TOGETHER ARE HARD ON THE EYES

THE MEANINGS OF COLORS VARY BY CULTURE

Takeways from the book “100 Things Every Designer Needs to Know About People” written by Susan Weinschenk, Ph.D. I just logging the Takeways given at the end of all chapter of the book. These are not my writing. I am just posting them for me for future reference.